Thank you from your winner Mike

Thanks to everyone who asked questions, voted and turned up in the live chats – I had an amazing two weeks, and it was great fun getting to know all of you. I could never have imagined I would get asked the wide variety of stuff you all came up with, and I passed on lots of questions to other scientists I know because they were so interesting! I hope you enjoyed our answers and had as much fun as all the Niobium scientists did.

As you all know by now, my research is all about making computers do creative, artistic things – and I’m especially interested in getting them to make videogames. But those games aren’t much use if they stay on a computer in my rucksack all day long – I want people to play them! So I’m going use some of the money from I’m A Scientist to purchase some mobile gadgets and some special software that’ll help me build a mobile app for ANGELINA. We’re going to put all of ANGELINA’s games on it, so you can play them and see how ANGELINA is slowly getting better at designing them.

I’m also going to record some videos and write some guides that explain all the cool artificial intelligence work we’re doing too, so if people are interested they can learn more about how exactly ANGELINA works. This will all be in the app along with the games. 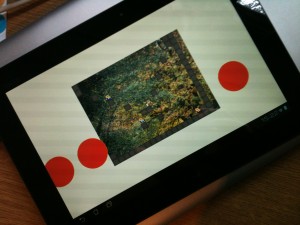 I spent the first weekend after I’m A Scientist finished learning what I’ll need to get it all working, and took a sneaky first photograph so you can see the first step – there’s still a long way to go though. My supervisor has very kindly lent me a Google Android tablet so I can start testing code and practicing! I’ll be posting updates on how it’s progressing on ANGELINA’s website so you can see it all come together!

In my profile I also said I would donate some money to Code Club – a very new organisation run by just two people, who want to get primary schools to host programming lessons for Year 6 students. They’re recruiting an army of volunteer programmers (over 1000 of them so far!) to go into schools and help show kids how exciting and awesome programming can be. I asked Clare, one of the founders of Code Club, what she’ll be spending your money on. She told me that Code Club is going to be demonstrating some of their ideas for lessons at science festivals and kids’ days, using a special Lego kit that connects to a PC called Mindstorms! They need money to buy kits for this, and a portion of the money you’ve given will be going towards that, so more kids are encouraged to check out Code Club when it hits their schools!

Thanks again for asking questions, being so interesting to talk to, and thanks for voting especially! I’ll try and make it ANGELINA’s app as fun and interesting as I can.